JUDGE SLONE, OTHERS RECALL NIGHT, HONOR THEY WILL NEVER FORGET

Fourth Judicial District Circuit Court Judge Duane Slone was in a jubilant mood. He had just been presented with one of the nation’s highest judicial honors by Chief Justice of the United States John Roberts in the United States Supreme Court Building in Washington, D.C.

As he, his immediate family, friends from all over the world, and a distinguished delegation of Tennessee judicial leaders assembled in the U.S. Supreme Court’s Great Hall for a photo after the awards dinner, Judge Slone heard someone behind him say, “We need to sing ‘Rocky Top.’”

“Don’t you dare,” Judge Slone said, but it was too late. The singing had begun.

“I hear behind me someone start to belt out ‘Rocky Top’ and instantly you have 42 people at the top of their lungs singing,” he remembers.  “I’m so glad we did it. It was so cool. You could hear it echoing around the Great Hall and all around the Court.”

This anthemic song gets played and sung at all types of events in Tennessee, but that night in the Nation’s capital it had an added significance, representing not just pride in the state but pride in the East Tennessee judge whose vision and determination back home had given new hope to so many weighed down by chemical dependency.  With pioneering programs like the Tennessee Recovery Oriented Compliance Strategy docket, Judge Slone had shown himself to be a leader unafraid to take risks and try something new to get positive results. For his efforts, he was named the recipient of the National Center for State Courts’ 2019 William H. Rehnquist Award for Judicial Excellence. The song was a celebration of Judge Slone, his work, and a night that no one will ever forget.

The “surreal experience,” as Judge Slone puts it, started back in August when, toward the end of a long day in court, he saw that he had a missed call and text message from Tennessee Supreme Court Chief Justice Jeff Bivins. He called Chief Justice Bivins back as soon as he could.

Chief Justice Bivins asked him how his day was going and he said, truthfully, that it had been a long one.

“He said, ‘Let me make it a little better,’” Judge Slone recalls. “’How would you and your family like to go to D.C.?’  I said, ‘Chief, what are you talking about?’ He said, ‘I just got the call, and they allowed me to be the one to call and inform you that about 20 minutes ago Chief Justice Roberts signed the order that you are the 2019 William Rehnquist Judicial Excellence Award Winner.’ I’m speechless. I start crying. Then I have to go back out into court. And I’m all puffy-eyed and everything.”

Flash forward a few months, and Judge Slone, his wife, Gretchen, his three kids, Oakland, 16, Joseph, 8, and Estella, 7, and his sister-in-law, board a plane to Washington, D.C. They spent the first couple of days sightseeing at Arlington National Cemetery and the White House. The National Judicial Opioid Task Force, which Judge Slone has worked with extensively, released its final report at an event at the National Press Club.

Then the big day came. November 21.

When he and his family first arrived at the Supreme Court, they enjoyed a 30-minute private audience with Chief Justice Roberts, who Judge Slone described as a “very, very genuine man, easy to talk to, very welcoming.”

At one point, Chief Justice Roberts asked Judge Slone’s son, Oakland, what it was like to be a big brother to his two younger siblings.

“He had the best line of the night,” Judge Slone said. “’It keeps me humble,’ he said. The Chief got a kick out of that one.”

After the meeting, the family was asked if they wanted to see the highest court in the land. They were taken up to the fifth story of the Supreme Court building where they discovered a basketball court.

“The kids got a kick out of that,” Judge Slone said.

When he spoke, Judge Slone touched on a variety of different issues that have impacted both his personal life and his judicial career. Foremost among those, is the story of his son, Joseph. Joseph was born with neonatal abstinence syndrome, and Judge Slone and his wife, Gretchen, adopted him when he was still a baby.  After they adopted Joseph, Judge Slone became determined to understand what could possibly drive a woman to use drugs even after she became pregnant. He educated himself on the science of addiction, which led to the creation of the TN ROCS docket. That docket has turned into a model that other states are emulating in their struggles with the opioid-driven addiction crisis.

Judge Slone asked Joseph to stand up, and when he did so he received a standing ovation.

Another major topic he spoke about was his home of East Tennessee. Judge Slone identified three main qualities that pervade Appalachia and talked about how they have informed his work.

“There are three things about mountain people, three characteristics, that I really admire that you can see revealed in the work we’re doing,” Judge Slone recalled saying. “One characteristic is that we care about each other. Number two is that we’re resourceful. And number three is we’re innovative. Think about where we live and the lack of resources, and then think about the reduction in overdose deaths, the number of healthy babies born, the mothers staying united with their children that we’ve experienced. It’s all just a group of people working locally using the resources we have. The government has a role in the opioid-driven addiction crisis, but at the end of the day you can’t complain about what you don’t have when you’re talking about saving people’s lives and trying to do all that you can to have healthy births.”

The night was memorable for more than just Judge Slone and his family.

Chief Justice Bivins said that the unforgettable event could not have been dedicated to a more deserving person than Judge Slone.

“Thursday night, November 21, 2019 is a night that many of us will long remember,” Chief Justice Bivins said.  “What a privilege and an honor it was to be with Judge Slone and Chief Justice Roberts for the Rehnquist Award dinner.  I can think of no better candidate across this nation than Judge Duane Slone for this honor.  In short, Judge Slone’s work has saved an untold number of lives in our state and across our country.  I was honored to be a part of seeing our friend and colleague receive this well-deserved honor in this historical setting.”

Justice Lee reflected on the evening, what it meant to her, and what it will continue to mean to her going forward.

“The message for me was that wherever we are, if we are willing to work hard and accept new challenges, we have the opportunity to make a significant difference in the lives of others,” she said. “Judge Slone, a trial judge in rural southern Appalachian, saw the devastating effects of the opioid crisis in his community. Experts from around the country were grappling unsuccessfully with the opioid crisis. Judge Slone decided to learn all he could about the problem and then came up with an effective program through his court to help people suffering from the chronic disease of drug addiction. Instead of judging these people harshly, he understood their condition and gave them options. His program was tremendously successful and has become a model for the nation. And it all came from an innovative and thoughtful trial judge in a rural area with limited resources.  Judge Slone’s story should inspire us not to accept the status quo and instead to search for ways to help people who cannot help themselves.”

AOC Director Tate also shared her thoughts about the evening and about Judge Slone.

“As an attorney, the opportunity to spend an evening in the U.S. Supreme Court Building is in itself such an honor,” she said. “Being surrounded by portraits and statutes of Justices who have protected our Constitution and our democracy is humbling. From the soaring ceiling to the enormous marble columns to the red-velvet and leather Supreme Court Chamber, the pomp and circumstance certainly makes one so very proud to be an American- and part of this noble profession.

“And then on top of that to see our own Judge Slone recognized for his unrivaled and ongoing contributions to fighting the opioid epidemic by Chief Justice Roberts was awe-inspiring, inspirational, and truly unforgettable.”

For his part, Judge Slone hopes that the whirlwind experience of the past week can serve to send a message to others that their hard work is appreciated and can truly make a difference.

“I hope to use the platform that this award gives me to inform, inspire, and involve other judges and justice systems stakeholders to go as far upstream as we can and meet people where they are and provide hope and healing to justice-involved people with substance use disorders and co-occurring mental illness,” he said.

As he moves forward in this mission, though, Judge Slone will always have room in his heart and his memory for this incredible honor.

“I don’t want to wake up from this dream,” he said. 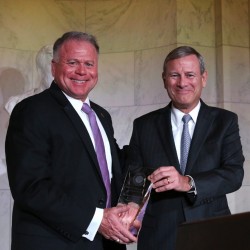